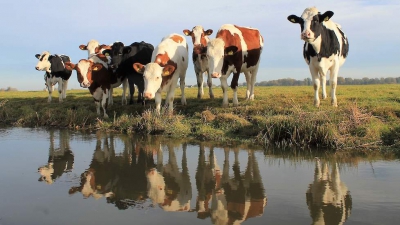 The province of Groningen has made a subsidy of 27,000 euros available for the new Natural Meat Cooperation Westerkwartier. In addition, 15,000 euros also goes to the cultivation of organic shiitake mushrooms.

The natural meat cooperative is part of the Westerkwartier Area Cooperation. In the natural meat cooperative, ten dairy farmers and five meat farmers are currently working together with the Forestry Commission and the Kroon Meat slaughterhouse in Groningen, says chairman Alex Datema. The farmers bring in bulls that would normally go to veal farming. Most are 50 percent Belgian Blue. They are geostated and slaughtered at the age of two years.

The animals walk either on the cattle farmers' own land or on a 25-hectare site of Forest Commission that the Cooperative uses. That area can still expand. "A lot of natural land is currently being laid out in the Westerkwartier, and in this way they continue to be used for agriculture," he explains.

100 in 2021
Two years ago, in the run-up to the official foundation, farmers already started keeping bulls. The first bulls have already been slaughtered and the quality was good, according to Datema. "We can probably slaughter 40 this year and around 100 next year," he expects.

For selling the meat, the cooperation is now also joining forces with Kroon Meat. The subsidy will be used to further expand the organization and to develop a market concept aimed at regional sales. Groningen farmers who are interested in taking part can register via the cooperations website.

Tree trunks
In addition, the province is investing in shiitake mushrooms as meat substitutes. The company Igro starts working in Tjuchem with the organic cultivation of shiitake. They are commonly grown on straw and sawdust, which has the disadvantage that too many residues are left in the mushroom, according to the province.
Igro wants to grow them on tree trunks from the Forest Commission. Grafting is done with the help of staff from social workplaces. If the method turns out to be effective, this cultivation can become an easily accessible additional form of income with a good yield for arable farmers whoi have some space on their land, according to the province.

Source: Agrio -Veldpost
Click here to the full article and other interesting reads as well

Oyster mushroom goes in the “Doubleganger and Zwarma” Mushroom Council’s new ad campaign encourages consumers to remix their burger recipes
back to top
Cookies make it easier for us to provide you with our services. With the usage of our services you permit us to use cookies.
More information Ok