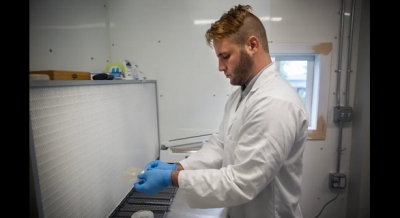 If there is one thing that excites Josh Peitzman, it’s the promise of rain.

A saturated forest floor is a fungal breeding ground, and Peitzman, 24, spends much of his free time post-rain on the hunt for mushrooms to identify. It’s become second nature for him to walk through Granger's Jester Park, eyes on the ground or in the nooks and crannies of trees, in search of something new to discover.

For a time, this hobby — which began five years ago — was just that. The self-taught mycologist foraged and identified, learned the taxonomic names of the species he’d uncover and eventually started tinkering with mushroom grow kits and still air boxes. Soon, however, he began picturing a future beyond his dishwashing job at Wasabi in Ankeny — a future in which he’d cultivate his own mushroom farm and fulfill a longstanding dream of following in his grandfather’s farming footsteps.

That mushroom farm, Fungi Fresh Farms, is now a reality. With support from investor-turned-business partner Jerrod Appenzeller, Peitzman is determined to grow the largest gourmet mushroom farm in central Iowa in a renovated shipping container in Grimes. Just months into production, Peitzman and Appenzeller are harvesting 50 to 100 pounds of specialty mushrooms per week for local farmers markets, restaurants and CSAs (community supported agriculture farm operations), but the two say it is just the start.