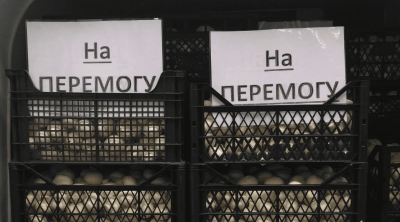 Due to the Russian invasion and in several cases, rockets hitting mushroom complexes and causing partial destruction, about half of the mushroom farms were forced to stop. Ukrainian mushroom growers that stayed behind, continue to harvest where possible and support the army and the population.

Of the seven largest composting plants in Ukraine, two ceased operations altogether and were forced to evacuate staff. Five others stopped producing new batches immediately after the fighting began, and in some cases disposed of what was already in production. Thus, the composting plants, which are still working, have the opportunity to ship compost for another week or two.

Peat for mushroom growing has become a particular problem, as the main deposits of peat, and, accordingly, the production of so-called "casing soil" are in the north of the country, where the situation is very turbulent. Therefore, most of the casing soil production stopped shipping from the first days of hostilities. As of March 15, it is known that some of them have started offering peat, but the situation remains unstable.

Mushroom farms and compost production reported that the cost of delivery of peat, compost and mushrooms increased by 2-3 times. In addition, it is difficult to find transport, and a significant number of regions remain almost inaccessible for delivery there and there.

About half of the mushroom farms have completely shut down, in many cases simply by turning off the lights and evacuating. Other farms, in areas where the situation was calmer (often this means that missiles and fighters fly directly over the roofs, but do not drop bombs directly in the village), continued to harvest. Much, or even all, of farmers hand over their products to the army or as humanitarian aid to the population.

Source and for more information:
Maksym Yenchenko Mushroom Information Agency "UMDIS"
Telephone: +380-67-506-45-21
Email: This email address is being protected from spambots. You need JavaScript enabled to view it.
Website: www.umdis.org