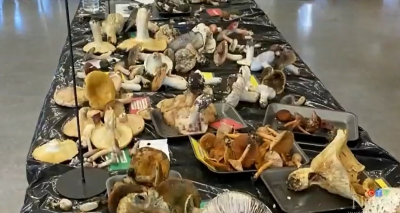 A lack of rain on Vancouver Island this summer and fall is making things difficult for mushroom pickers who are usually able to find a bounty this time of year.

Generally, this far into October, collecting mushrooms is literally a walk in the forest. But this year is proving more difficult.

"This is an exceptionally dry year," said Thom O'Dell, a fungi educator who has been collecting mushrooms for more than 40 years. O'Dell even has the honour of naming a new species he and some others first discovered.

"The Cantharellus cascadensis. We named it after the Cascade range where it was discovered," said the Vancouver Island man.

O'Dell says he's finding far fewer chanterelles than he'd expect at this time of year, though he does stumble across some lobster mushrooms.

"It's not the most photogenic," he said with a laugh. "But these are some of the early ones that would normally come up with the summer rain."

O'Dell's problem finding mushrooms is being felt up and down Vancouver Island.