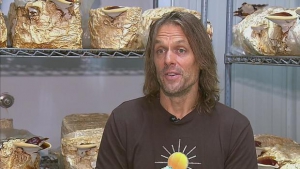 From NFL quarterback to mushroom farmer: Jake Plummer's journey from the gridiron to the fields of Fort Lupton

"It was destined for me to be here," former Bronco Jake Plummer told CBS4's Romi Bean.

These days, Plummer is about as far away from a football field as you can get. The former Broncos quarterback spends his days hard at work at the MyCOLove mushroom farm in Fort Lupton.
jake-plummer-mushroom-farmer-former-bronco-qb.jpg
CBS

"We're talking about community, collaboration and connection. One of our main goals and missions here at MyCOLove is to put a lot of intent and love into the mushrooms that we're growing," Plummer said.

The process of growing mushrooms is complicated and lengthy. But for Plummer and his team, it's a labor of love.

"We're growing these mushrooms and extracting them so people can have a different approach to their health and wellness," he said. "That's a real powerful thing. So we handle it with extreme care and diligence."

Plummer's passion for medicinal and functional mushrooms stems from the benefits he's experienced in his health and wellness journey.

"I haven't been sick at all," Plummer explained. "I sleep really well now. I feel less fatigue, less stress. My gut health, my body, my digestion, my energy levels, pain in my joints has gone away."